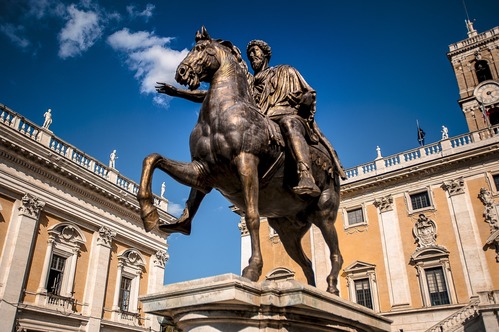 Marcus Aurelius, best known by his portrayal in Russell Crowe’s epic film, Gladiator, was actually a real-life Roman Emperor. In the film, we only saw Marcus as a dying old man who served mostly as a plot device to initiate Russell Crowe’s journey from beloved Roman legionnaire general to a slave gladiator. But in history, Marcus was one of the most acclaimed Roman rulers.

During his reign from 161 – 180 CE, he crushed the resurgent Parthian Empire (modern day Middle East), tussled and checked the barbaric Germanic tribes in Central Europe, and quelled a revolt by his Eastern regent Avidius Cassius. In a time of struggle and conflict, Marcus maintained some semblance of order and peace in the Empire. But he was much more than just a war leader. In fact, he was a prolific writer and thinker, and best known by philosophers as a leading voice in the Stoic school of thought.

Stoic ethics can perhaps be crudely chopped down to a few basic tenets:

1.) Apply self-discipline and logic to become free from emotion in decision-making and judgment,

2.) Happiness is a choice of free will and don’t let the world’s rigidity make that choice for you, and

3.) Actions and behavior speak louder than words. Let’s take a look at Marcus’ writing to tease out the nuances of his stoic philosophy:

On getting things done:

I recommend that you check out his full Meditations to grok into the mind of a Roman Emperor. But at the end of the day, apply what you read and make great things happen in the world.

This post first appeared at HVMN.com and is reprinted with their permission.