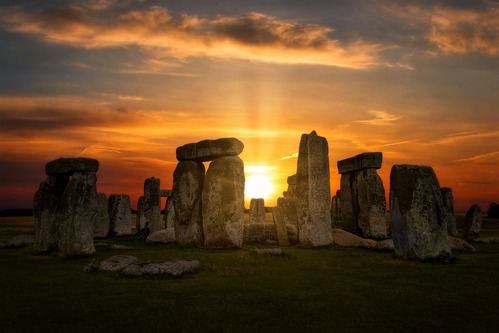 This year the Winter Solstice is Monday, December 21, 5:02 am Eastern Standard Time.

So what happens at 5:02 AM  EST? After seeming to stand still for a few days, the sun will change direction and head the other way. Watch the morning horizon and you will see.

“Solstice” derives from the latin word  for “sun stands still.” The sun appears at its lowest in the sky and seems to stay the same for several days before and after this date. It’s the shortest day of sunlight in the year.  As the hours of daylight gradually get longer, many cultures see it as a “rebirth” of the sun.

The Ancients, and still many indigenous people today, mark this day with ceremonies and bonfires to honor, and invite in, the return of the light.

And we have special help this year from the planets Jupiter and Saturn. They will be so close together in the night sky that they’ll appear to merge with one another on the Solstice, forming something that hasn’t been seen for 800 years – a Christmas Star! Also known as the Star of Bethlehem

Astronomers are calling it the Great Conjunction of 2020. The two largest planets in our solar system will appear to merge in the night sky. It won’t happen again until 2080.

Look in the southwestern sky just after sunset. You can watch a livestream of the event courtesy of the Lowell Observatory at 7 pm EST on December 21 here: https://youtu.be/XrRcfaWutLQ

Jupiter sits  over a half billion miles away, while Saturn is roughly double that distance. What an amazing reminder of our place in the universe!

There is a lot of suffering and confusion in the world right now, so this is a really good time for us to pull ourselves up and let our own light shine, too.

I’ve written before on ways to celebrate the Solstice, and you can find those posts here:

The importance of celebrating the Winter Solstice

I recall a friend seeing the film Avatar and being sad that there are no longer people who live in harmony with nature as the Na’vi of Pandora did.

Well, of course there are, although the modern world is doing it’s best to destroy their way of life.

Indigenous [tribal] people all over the world have lived in harmony with nature since the beginning of time. And they had the utmost respect for their fellow humans.

Celebrating the Solstice and the return of the light is one of the ways they lived in balance with nature.

Their respect their for fellow humans was a part of that balance.

Indigenous peoples around the world hold the belief that all humans, animals and the natural world are related.

The Lakota prayer Mitakuye Oyasin, the Maya phrase, In Lak’esh  and the Hindu greeting Namaste are examples of that teaching.

There was even a Native American version of “Namaste” stated by the great Lakota Warrior Crazy Horse, when he reportedly said,

“I salute the light within your eyes where the whole universe dwells. For when you are at that center within you and I am in that place within me, we shall be as one.”

Scientists are finding there’s something to that.

According to Lynn McTaggert’s book, The Field; The Quest for the Secret Force of the Universe, Quantum physicists have discovered that everything in the universe, including the human mind and body, is connected by a vast quantum energy field. In other words, everyone and everything are connected.

In a nutshell, quantum physicists have proved what indigenous peoples have always known.

To many ancient cultures, the Winter Solstice was the start of a new year. I can’t think of a better way to start a new year than to commit to being the light.

There is an ancient teaching that when 144,000 people become enlightened, we’ll have reached a critical mass that will shift the planet. Everyone else won’t even have to do the work — they will be caught up in the wave of peace and prosperity to follow. 144,000 is a tipping point.

The time is now. We need to be our best selves to shift the planet towards peace. If we live as though everyone, and the earth, is our relative, we will start the process of a world living in harmony.

Be the light, be the peace, be generous and kind. Be luminous!