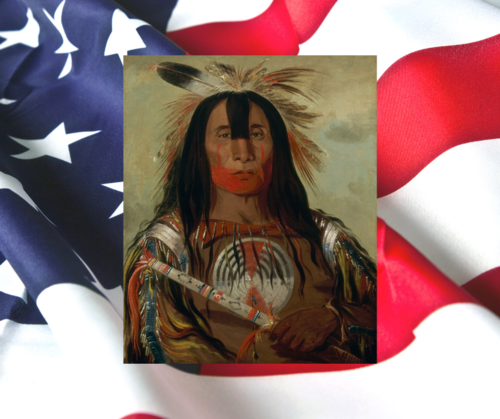 If you’re like me, I learned in grade school that the U.S. Constitution was based on ancient Greek democracy.  Which was a creative stretch of the truth, since ancient Greece was not a democracy.

My research as to what children are taught today about the origin of our government is also disappointing, although there are some states that have updated the teachings to include Native American influence.

The True History of our Constitution

This is absolutely, unequivocally historical fact.  While there may have been other influences, when compared side by side, the influence of the Great Law of Peace is irrefutable.

I find it sad that the true story is still not taught in all our schools [although some do].  But here it is:

In the 12th Century, five tribes in what is now the northeastern U.S. were constantly at war:  the Mohawks, Seneca, Oneida, Onondaga and Cayugas. The wars were vicious and, according to tribal history, included cannibalism.

He traveled from tribe to tribe over the course of years, preaching peace because peace was the desire of the Creator.  Oral tribal history says it may have taken him 40 years to reach everyone and get agreement from all five tribes.

Eventually, the five tribes agreed to the Great Law of Peace and became known collectively as the Haudenosaunee, which means People of the Long House.  Outsiders refer to them as Iroquois.

The United States of America was born.

1) The Seventh Generation principle:  The Constitution of the Iroquois Confederacy states that chiefs consider the impact of their decisions on seven generations into the future.

2) The role of women: Clan mothers choose candidates [who are male] as sachems [political leaders].  The women maintain ownership of land and homes, and exercise veto power over any council action that may result in war.  The women can also impeach and expel any leader who conducts himself improperly or loses the confidence of the electorate; then the women choose a new leader.

Beneath the tree the Five Nations buried their weapons of war.

Atop the tree is the Eagle-that-sees-far.

There is a bundle of five arrows tied together to represent strength of five tribes bound together in peace.

The Tree of Peace became the Liberty Tree displayed on colonial flags.

On the U.S. Great Seal, the American Eagle clutches a bundle of thirteen arrows, representing the original colonies.

Our eagle also holds an olive branch symbolizing that the United States of America has “a strong desire for peace, but will always be ready for war.”

However, the Iroquois Confederacy, as with most tribes, had separate leaders for war and peace.  As a lawmaker, the sachem could never go to war in his official capacity as sachem.  If disposed to take the warpath, he laid aside his civil office for the time being, and became a common warrior.

2) Health:  “Health means that the soundness of mind, body and spirit will create a strong individual. Health is also the peacefulness that results when a strong mind uses its rational power to promote well-being between peoples, between nations.”

3) Power:  “The laws of the Great Law provide authority, tradition and stability if properly respected in thought and action. Power comes from the united actions of the people operating under one law, with one mind, one heart, and one body. Such power can assure that justice and healthfulness continue. People and nations need to exercise just enough power to maintain the peace and well-being of the members of the Confederacy.”

It’s the omission of these three principles, the seven generations rule and the role of women that cause Native Americans today to say that, the United States Government copied the Great Law of Peace but didn’t really understand it.

So our forefathers copied the Great Law of a people whose country we stole and against whom our government committed genocide, and then kept it a secret for two hundred years.