Whose God is it, anyway? 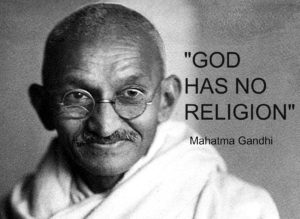 Whose God is it, anyway?

That’s the question I asked myself when I received a letter from a reader who was concerned that her prayers to God might be rejected because she’s not a Christian.

That’s a heavy thought, but I immediately reassured her that her prayers would not be rejected by a compassionate, wise, good and just God just because she isn’t a Christian.

The reason is that God is not Christian.

God is not Muslim.

God is not Jewish, or Buddhist or Native American…

There is just one God and whatever your beliefs, your prayers are heard. Period.

To me, the different religions are like different languages. Whether directed to God [in English], Dios [Spanish], Dieux [French], Allah [Arabic], or Wakan Tanka [Lakota], I believe the Higher Power hears prayers from a sincere heart.

Occasionally when I am conducting a Native American ceremony, a newcomer will ask me what God I pray to, and I always give the same answer: “The same God you pray to.”

To me, it’s tragic that some people have the idea that their religion is the only valid religion, or that anyone who has a different religious tradition than they do can’t possibly be praying to the One God.

That inflexibility may be why the largest growing denomination in the U.S. today is people leaving organized religions. They are known as “spiritual but not religious” or “none” which is how they would answer any questionnaire asking them to identify their religion.

I’m certainly not going to try to convince anyone in this post to change their belief. But for those feeling insecure about whether their prayers will be heard, I heartily believe the answer is: yes!

The evidence of answered prayers

I was raised a Catholic and was taught that a prayer was something that was memorized, such as the “Our Father” and the “Hail Mary,” so I dutifully memorized them as a child.

Many years later, when I sat in my first Native American ceremonies, I heard people pray from their hearts, using their own words, talking directly to their Creator.

That was quite a revelation to me, something that I didn’t know was possible. And I also saw that those prayers were answered. So, for me, that settled right then and there that prayers from a sincere heart are always answered, regardless of the name of the God you address them to.

However one prays, be it reciting a memorized prayer handed down through the ages, speaking from one’s heart or reading from a prayer book, it all counts, and will all help.

I love to pray, and it is part of my daily spiritual practice. Here are just a few of the many benefits to prayer:

However you do it, and to whomever you direct it, prayer will bring benefit to all, and that is a very good thing.

“Praying is not only following rituals and doing it just right. It’s how we feel inside, how our heart connects, and how we live.” ~ Bear Heart in The Wind Is My Mother