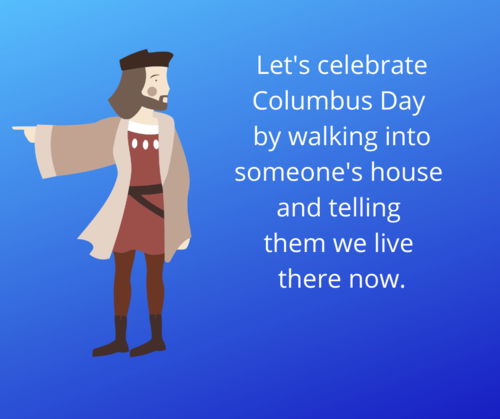 I don’t think we should be celebrating Christopher Columbus.

Imagine a foreign-speaking stranger walked into your house one day, claimed it was now his and threw you out, or even enslaved or killed you and your family.

Would you celebrate him with a national holiday?

Yet most of the United States and other countries in the West continue to celebrate Christopher Columbus. They think he discovered the “New World” even though there was a perfectly marvelous civilization already living here.

[Columbus Day in 2020 is Monday, October 12 – a Federal holiday.] All but 15 states have changed the day to Indigenous People’s Day. It should be all states.

Native Americans had been living fulfilling lives on this continent for thousands of years before Columbus’ arrival.  Or, as author Kurt Vonnegut put it, “1492 was simply the year sea pirates began to rob, cheat and kill them.”

Schools today are finally teaching children that Columbus and his men enslaved native inhabitants of the West Indies when they first arrived.  That’s a step in the right direction because when I was in school, I wasn’t taught that truth.

So why do most states still celebrate him?

The voyage during which Columbus stumbled upon North America was actually a commercial expedition. Because the spice trade had become expensive by having to transport over land, he was seeking a water route to the Far East.

As we all know from childhood, Columbus was financed by King Ferdinand and Queen Isabella of Spain. He and set off in three ships:  the Nina, Pinta and Santa Maria.

After a month, Columbus and his crew were frustrated and ready to turn around when they suddenly saw land: an island in the Bahamas.  Columbus thought he was in the East Indies and called the inhabitants Indians.

However, another version of the origin of the name “Indian” is that Columbus recognized that these people were “of God” – in Dios. Which became “Indian.”

He recognized their gentle nature.  In a letter to one of his patrons, he wrote:

“They are artless and generous with what they have, to such a degree as no one would believe but him who had seen it.  Of anything they have, if it be asked for, they never say no, but do rather invite the person to accept it, and show as much lovingness as though they would give their hearts.”

Right after making that observation, Columbus offered to send back as many slaves as requested.

Columbus wrote in his journal: “with fifty men they can all be subjugated and made to do what is required of them.”

By 1514, the Spanish conquerors gave an ultimatum that the Natives must convert to Christianity or be enslaved and “we shall take away your goods, and shall do all the harm and damage that we can.”

Columbus made three more trips to the “new world” but felt like a failure for not having found the new shipping route for spices he’d been seeking.

Legend has it that he died in 1506 a disappointed man.

Columbus was not the first European to discover North America

The Vikings were here 500 years before Columbus. According to historical documents now confirmed by archeological findings, Vikings sailed across the Atlantic and reached the northeast coast of North America in 1000 AD. There are remains of an early 11th Century Norse village in Newfoundland.

The Irish Monk St. Brendan the Navigator reached North America in the 6th Century. The account of his journey was published some 300 years later in Navigatio Sancti Brendani [Travels of St Brendan].

But these early explorers were polite, leaving only footprints and taking only memories, to paraphrase a famous instruction for visiting new land.

If Columbus had the same sensibilities as the Vikings and St. Brendan, the world would likely be a very different place today.

Once again, I invite you to share with your children the true history of Native Americans in this country.

And I ask all states to change the day to celebrate the indigenous people whose land our ancestors so cruelly stole.

Hanke, L. (1949). The Spanish struggle for justice in the conquest of America. Philadelphia, PA: University of Pennsylvania Press.

Do You Live In Linear Time or Natural Time? Why It Matters

How the 7th Generation Principle May Save Our Planet