Goal setting: how to make 2017 your best year yet! 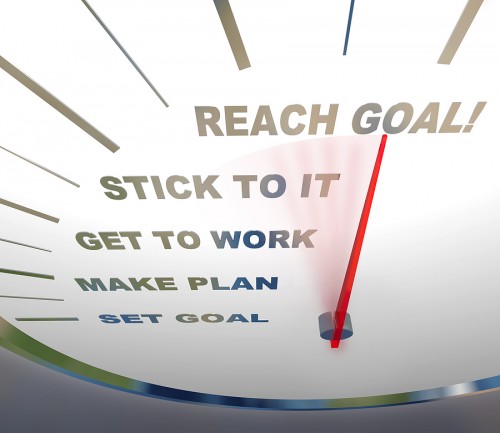 The concept of making “new year’s resolutions” has been a bit of a joke in our society for about as long as I can remember — the joke being that people never follow through so the “resolution” will never come to fruition. And for reasons that escape me, very few people talk about the key to success, which is “goal setting.”

And that’s a shame because the start of a new cycle [of anything, not just a year] is a chance at a new beginning.

“Without goals ….. you are like a ship that has set sail with no destination.” ~ Fitzhugh Dodson

How often in our lives have we wished for a “do over?” Well, we can “start over” any old time. And setting specific goals, instead of making resolutions, is an excellent way to do it.

But you have to know the right steps.

The reason resolutions don’t work is that they’re just words and don’t include a plan. Research has shown that after six months, less than half of people who made New Year’s Resolutions have stuck to them; after a year, less than 10%. Why? Because they had no plans.

Goals, however, entail a plan and focus on action!

The steps to Successful Goal Setting

GOALS MUST BE  SMART: specific, measurable, attainable, realistic and time-based : what, how much, by when?   [For example, “I want to lose five pounds by March 1, 2017.”]

Research shows that those who write down their goals accomplish significantly more than those who don’t.

Goals simply must be written down!

The last week of each December I sit down and write out my goals for the upcoming year. I have a special book just for this purpose and I keep it handy for frequent review so that I stay on target. I it also helps me with the next step:

“All achievement starts in the imagination before it is ever realized in the physical form.” Napoleon Hill

What does it look like? What does it feel like? The mind cannot tell the difference between vivid imagination and what actually happens.

If you want a car. specify the model, color and features.

See yourself driving it.

Cut out pictures of the car and look at them every day.

Take time every day to see yourself accomplishing your goal.

A Harvard University study found that students who visualized in advance were able to perform tasks with almost 100% accuracy.  Students who did not visualize performing their tasks in advance achieved only 55% accuracy.

There’s no such thing as an unrealistic goal. If you can see it, you can achieve it.

KNOW WHY YOU WANT IT

You don’t need to know how you’ll achieve your goal at the beginning. What you need to do will become evident over time. Reasons come first, answers follow.

Years ago I set a goal to go to Ireland. I had no money to make the trip and didn’t know how I’d pull it off. But I had faith and even told friends I was going. I got a surprise windfall a few months later and the money paid for the trip!

Also, it’s very important the goal be something you feel excited about, not something someone else wants for you.

This was the one flaw in the film and book “The Secret” – not enough emphasis on the need to take action to accomplish your goals.

You need a plan. So if you want to lose weight you might want to ask friends who’ve lost weight how they did it, read diet books, talk to your doctor, join Weight Watchers, cut out desserts, start an exercise program. The resources to success are endless.

Asking yourself what, how often and by when are the keys to your action plan.

HAVE A SUPPORT TEAM

Put yourself on your support team by stating your goals in the positive: Goals focus on what you want, not what you don’t want.

Don’t say IF, say WHEN I achieve this goal. Positive wording is critical.

BE FLEXIBLE AND WORK AROUND OBSTACLES

Space shuttles are actually off course most of the time. Their arriving at their target is a matter of making constant corrections to their course.

Identify potential obstacles to achieving your goal and make a plan for how to work around them. I live by the motto that there is a solution to every problem.

For each of your short term goals, identify three small tasks you can do in the next week toward accomplishing it. Make a plan and stick to it!

And visualize the outcome you want. It works!!