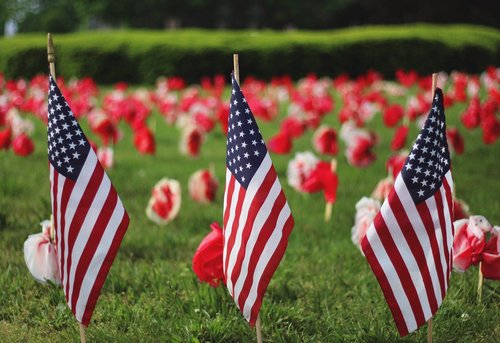 Officially, Memorial Day in the United States is a day for remembering and honoring all Americans who died in any war.

However, Memorial Day weekend also marks the beginning of the summer holiday, with people traditionally focusing on shopping, family gatherings, picnics and sporting events.  So we often forget the real meaning of the Day.

Of course, many of us are in lockdown to prevent the spread of Covid-19, and may not be able to do summer-type things anyway.

But whatever you do, please take time out from this holiday weekend to say a prayer of thanks for those that gave of their lives so that we could live ours in freedom.

My father and his three brothers were all in the service during World War II. Uncle Frank was the youngest and wanted to follow in his brother’s footsteps, so he joined the Air Force.

On day during the war, my grandmother, Nana Sue, was shopping with her oldest daughter when she suddenly felt very weak and had to be helped to the car.

It wasn’t a heart attack; she had a strong premonition that one of her sons had just died.

She was right.  The next day she learned that, at the minute she felt faint, her son Frank was killed in a plane crash during flight training for the Air Force.

Such is the connection between mother and child.

Many of us have heard such stories, perhaps even experienced them. Most of us have family members who entered the Armed Services and fought for our freedom. It’s important to honor them for that, especially the ones who died, or came home with permanent wounds.

Regardless of one’s political leanings, or whether you personally knew them, the death of a young person in war, far from home, is a tragedy.

Saving Private Ryan is a 1998 film which follows a World War II Normandy Invasion company commander and his special squad sent to locate and bring home a soldier whose three brothers had all been killed in action.

The squad of 8 is led by Capt. Miller [Tom Hanks] and six were killed during the mission, including Capt. Miller.

Captain Miller’s dying words to Private Ryan were, “James, earn this… earn it.”

“My family is with me today. They wanted to come with me. To be honest with you, I wasn’t sure how I’d feel coming back here. Every day I think about what you said to me that day on the bridge. I tried to live my life the best that I could. I hope that was enough. I hope that, at least in your eyes, I’ve earned what all of you have done for me.”

Uncle Frank died in World War II, never having left behind any children – his only legacy courage and dedication.  I can honor his memory by trying to live my life in the same way.

My request today is that we remember those who have sacrificed their lives so that we may live ours. Try to live your life the best you can, and earn what our soldiers have done for us.

A teaching from Bear Heart:

In The Wind Is My Mother; The Life and Teachings of A Native American Shaman, Bear Heart said:

“The word memorial does not indicate that someone has died.  It symbolizes that someone has lived. What is going to be that living memorial that you’re going to leave behind? Why are we here now? We’re here to add something, to construct, to preserve. To leave something good for those little ones who are going to come into our world. Let that motivation be so firmly established in your heart and mind that you can say, “I will stand for this. I will live for this.”