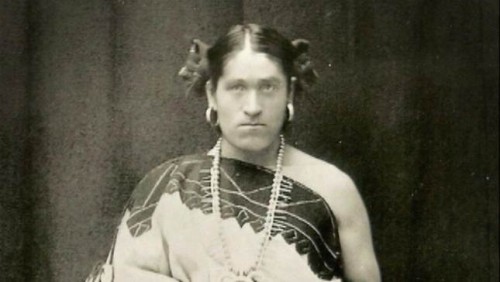 More and more, modern people are turning to indigenous teachings to learn a better way to live. Perhaps acceptance of gay rights could be the next lesson.

Here are a few things Native Americans have already contributed:

Yet, in spite of the U.S. Supreme Court’s landmark 2015 ruling in Obergefell v. Hodges conferring the right to marry to same-sex couples, many in the United States still oppose same-sex unions.

We have so much to learn.

One of the best examples of the acceptance of sexual variance is the revered Zuni Man-Woman, We’Wha. [pronounced WAY-wa].

Born as a man, yet adopting women’s ways and dress, We’Wha was an honored member of the Zuni. He excelled at weaving and pottery, and was a recognized expert in Zuni religion. In 1886, he was sent to Washington, D.C. as a representative of the Zuni.

That We’wha became a representative of the Zuni tribe makes it clear that gender and sexual differences were well-accepted by the Zuni.

Prior to contact with European missionaries, most Native American tribes were very accepting of sexual variation. In fact, some considered there to be four sexes:

All were accepted and held a place of honor in their societies. Many tribes had their own terms for referring to them: for example, the Lakota [Sioux] referred to them as winkte; the Navajo used the term nádleehí.

In addition, prior to European contact, a multiple gender tradition existed among the Kanaka Maoli people’s of Hawaii; and the Incas worshipped a dual-gendered God.

Early anthropologists who observing Natives adopting the dress of the opposite sex used the word berdache [roughly translated to “kept boy”] to describe them. The term was derogatory, so in 1990 an indigenous lesbian gay gathering chose the term “Two Spirit” to replace berdache.

Many Native peoples have adopted the English term “Two Spirit” to describe the entire spectrum of gender and sexual expression.

Two Spirit refers to having both masculine and feminine housed in the same body. Prior to contact with Europeans, Two Spirits were respected and influential members of the community.

“They are usually regarded as having special sensory qualities: they see, hear, taste, smell and feel things others can’t. This is because the Two Spirit people are seen to be linked to their ancestral spirits. They interpret visions. They are peacemakers. They exist to honor all living things, past and present, as sacred.” Dr. Zuleyka Zevallos in “Rethinking Gender and Sexuality”, September 9, 2013

Not every tribe today embraces Two Spirits. In my experience, the greater the Christian influence on Native tribes, the less tolerance there is of sexual variation.

The documentary “Two-Spirits” is the story of Navajo Fred Martinez, a nádleehí who was one of the youngest hate-crime victims in modern history, murdered at the age of 16 just for being who he was.

The Navajo used the word nádleehí to describe a male-bodied person with a feminine nature and, according to ancient Navajo culture, that was a special gift:

“The masculine and feminine together are sometimes reflected so completely in the body of one person it’s as if they have two spirits.”

The term nádleehí means “one who constantly transforms.”

“In Navajo teaching, in the old traditional world, there were four basic genders,” explains Wesley Thomas, Navajo scholar from Tsaile, Arizona, in the Two Spirits documentary.

“Women are the first gender, because Navajo is a matrilineal society. Men are the second gender; and the third gender is the nádleehí, who is born as a male person but functions in the role of a girl in early childhood and in the role of a woman in adulthood.

“And it’s just the opposite for the fourth gender, where they were born biologically female but functioned in the role of a boy in early childhood and matured into a man, and conduct their life in that gender identity.”

Let’s hope that over time our modern culture will embrace this kind of acceptance.