Father’s Day and the Native American tradition of adoption

On Father’s Day I remember how very blessed I am to have had three fathers, all at the same time.  This was not a product of divorce.  It was the product of the beautiful Native American tradition of adoption. 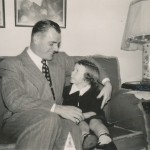 Me with my father

My birth father, John O’Donohue, was a quick-witted, hard working second-generation Irish-American who loved his family above all else.  Warm and generous, I never met anyone with a better sense of humor.

He was the life of every party, a just man and a good neighbor.  One of my childhood memories is of his reaching inside every parked car he saw with its lights on, and turning the lights off so the battery wouldn’t go dead.  As I said, a good neighbor.

My father’s younger brother, Eddie, died suddenly of a heart attack in the prime of life, leaving behind five children: four boys and an infant girl.  My dad became a surrogate father to his nephews, taking them to ball games, giving them gifts, filling in as best he could for the father they had lost.

I can honestly say that all these posts I write about having good character fit him to a T.  He was the epitome of the Irish saying,  “A finer man never drew the breath of life.”

Not a day goes by that I don’t miss him.

The Native American tradition of adoption 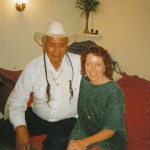 Me with Wallace Black Elk

My other two dads were Grandfather Wallace Black Elk [Lakota] and Bear Heart [Muskogee Creek].  Both called me their daughter.

I learned so much from each of them over the course of many, many years, it would be hard to separate the teachings.  All the things I write about in my posts start with their lessons.

When I first was spending time with Native Americans, I found the relationships confusing.  Why was this dark-skinned Native man calling that blue-eyed blond his sister? I finally figured out it was because of the adoption tradition and, to Natives, the relationship becomes as close as if they are blood relatives.

When you feel so close to someone that friendship isn’t enough, you may choose to adopt the person as a daughter, nephew, sister, etc.  The adoption may be a formal ceremony or as simple as saying, “I’d like to take you as my daughter because you mean so much to me.” 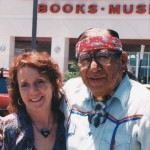 Me and Bear Heart

After Bear Heart’s son, Marc, was killed while serving in the U.S. Coast Guard, Bear Heart’s adopted brother, Raymond Butler, invited Bear Heart and his family over for a big feast. This is how Bear Heart described what happened:

“After we got through eating, he stood up and said, ‘Brother, you helped to put my mother away when she passed on and you said some beautiful words that I never forgot.  I called you “brother” at that time and we’ve become real close.

“You haven’t helped only my family.  Our entire tribe hears about how you help other people.  When they’re crying, you go over there and always seem to look after them.

“Now it has come to the point where you yourself shed tears over your great loss.  There’s nothing we can do for you.  I wish we could.

“But my wife and I called you here because we want to share our oldest son with you so that you can have someone you can call ‘son.’  And he can call you ‘dad.’

“Then he put a blanket around me and put some money in my hands.  That’s our way of adoption.

“So it became that way.  From that time on, Bubby Butler was like a real son to me.  Every Father’s Day I’d get a card from him, maybe something in the way of a package.  It was a beautiful relationship, just like a birth son.”

And so it goes in the Native American way: sharing heartaches, sharing joys, helping one another.  These are the types of lessons I learned from all three of my dads.

I wouldn’t be who I am today without them, and I am very grateful.

If you have a close friend, you may wish to take to heart the adoption tradition: