The problem with humility is that… 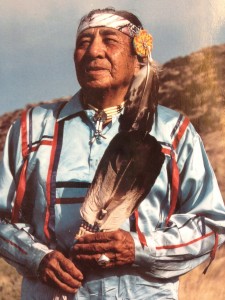 Bear Heart used to joke that, “It’s hard to have humility because you can’t brag about it – if you’re really humble.”

That’s true. But of course, the truly humble person wouldn’t even want to brag.

What’s the opposite of humility?

A simple, “How are you?” can lead to a 5 minute monologue on their recent achievements.

I can only assume that stems from a deep-seated lack of self-worth; why else would a person feel a need to work so hard to validate themselves in your eyes?

It shows that they don’t understand the simple tenet that people will judge you by your actions, not what you say about your actions.

This is particularly true in the spiritual realms.  Some of the most spiritually powerful people I have met don’t talk about themselves at all.

And their silence speaks volumes.

The Maoris, who are the indigenous people of New Zealand, have a beautiful saying, “Know who you are and stand tall.”

It means you let your actions do your talking. Let people judge you by that.

Over the years I’ve attended many gatherings of both Native and non-native people.  And I’ve seen a number of non-Native people work in a real obvious, loud manner, trying to be noticed by the elders.  They’d be noticed all right, but not in the way they hoped.

The elders are looking for the ones who work without seeking fame or credit, who want no reward other than helping the larger community. Those are the ones who will be groomed for future leadership positions.

I have a relative who runs the most spiritually powerful purification lodges I’ve ever been in. But he rarely talks about his credentials and achievements.

You’d have to ask a lot of questions to find out all he’s done and accomplished on the Red Road.  He instead says of his role in the lodge on his land, “I’m just a broom pusher around here.”

When he speaks, it’s to teach, not praise himself. That’s humility in action.

In the summer of 2006, I attended a Sun Dance on the Pine Ridge reservation in South Dakota.  I went there to support the dance, which means working, cooking, raking, doing dishes, praying and trying to stay out of the way.

It was my first year at this Dance and we’d been told to put our trash bags on the side of the road early Wednesday, which was trash pickup day.

On Wednesday, sure enough, there came the green pickup truck to get the trash.

But I wasn’t prepared for what I saw next.  The man who got out of the passenger side to load our garbage bags into the back of the truck was the Sun Dance chief.

This is a man who has great spiritual knowledge, can communicate with the spirit world for the benefit of his people, is a powerful healer and leader.  In another time in history he would be called a chief or a medicine man or even a holy man, and here he was collecting the trash.

He didn’t put himself on a pedestal or seek to be admired, he did what needed to be done with joy and laughter.  A perfect example of humility.

In fact, in the Native American tradition, the Chief was often the poorest man in the tribe.  If members of the tribe had no food, he would give some of his.  Whatever others needed, he would share what he had.

Here is an excerpt from an 1877 interview with the great Lakota Chief Sitting Bull that appeared in the N.Y. Herald [source: The Cultures of Native North Americans  p. 234. Christian F. Feest, editor]

Journalist: “I saw today that all the warriors around you clapped their hands and cried out when you spoke.  They liked you.  They seemed to think that what you said was right for them to say. If you are not a great chief, why do these men think so much of you?”

Sitting Bull:  “Your people look up to men because they are rich, because they have much land, many lodges, many squaws?”

Sitting Bull:  “Well, I suppose my people look up to me because I am poor.  That is the difference.”

The humility of being a hollow bone

The Native American term “hollow bone” means to be without ego, to empty oneself of self-importance so as to be a channel for healing to come through you, not from you.

In the Native American way, the true medicine people did not seek to draw attention to themselves, impress their friends, or take credit for their work.

They recognize that they are merely instruments, or hollow bones, because true medicine and healing comes from the Great Spirit — they don’t take credit for what the Creator does.

Grandfather Wallace Black Elk used to say “the only medicine man is the Great Spirit.”

Bear Heart, who was a powerful traditional healer of his tribe, never called himself a “medicine man” even though others often called him that. He said that he takes no credit for any healing that results from his actions:

“First, we don’t call ourselves ‘medicine people.’  . . .The medicine is already here –we just have certain knowledge that can put things together to bring about results.

“Second, we’re never to call ourselves healers or take credit when a patient we work with gets better – we are merely helpers.  There’s only One healer and that’s the one who created us.”

These very powerful spiritual leaders and healers are the perfect example of humility. We would all do well to follow their examples.

[quote]”That is not our way, to set yourself apart and talk about who you are and what you’ve done. You let your life speak for you. With the Mohawk people, wisdom is how you live and how you interpret what your mother and father, what your grandmothers and grandfathers have told you about this world – and then how you interpret that into the fact of living every day.” –Tom Porter, MOHAWK[/quote]
Molly Larkin