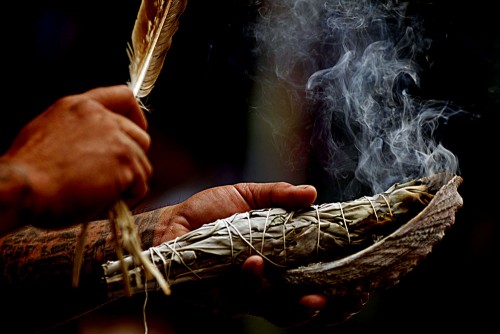 Many people have heard of “smudging,” and may even practice it, but there’s great value in knowing its history, and understanding the true sacredness of it.

There are three primary herbs used in the Native American tradition for smudging: sage, cedar and sweetgrass.

I have been taught the importance of burning only one herb at a time for smudging, otherwise you are giving mixed messages.

Sage is the most commonly used for cleansing the energy field of a person, place or thing, so I will focus on it for this post.

How sage came to the people

This is a story from Bear Heart about how sage came to the people:

A long time ago there was a village in North America where it seemed like things were going from bad to worse, to the point that things of a negative nature seemed to be predominant:

•   craftsmen were making mistakes in their work,

•   people were making accusations against one another,

•   people were accused of practicing evil.

There was a whole lot of discord among the people: friends and neighbors having falling outs, not allowing the children to play with the neighbor’s children. Many things like that were happening.

All of a sudden, a young boy around 13 or 14 years old showed up in the village with a bundle in his arms. As soon as he arrived, he asked to see the elders of the village.

When they were summoned he asked them to sit in a circle. As they did so, he said “I have this plant I want you to look at it. You can recognize it when you see it again because it will be growing in this area. It is called sage. It’s going to enable you to handle all the negative things that are blowing around this whole camp. That’s why I was sent to you. And so, please smell this and pass it around.”

As they did, they began to feel good towards one another. And then, while they were doing that he built a fire very quickly. When the sage came back to him in the circle, he put coals in a pile using his bare hands.

Then he put all the sage on it and said, “I want you all to smudge yourselves. This is how you do it.”

While they were smudging themselves each one suddenly began to feel good about the person next to him. They were so busy acknowledging one another, when they looked again for the boy, he had disappeared. They didn’t know where he came from or where he went.

That’s a story of how sage came to the people.

For thousands of years, incense and smoke have been used in spiritual and religious settings to connect with the spirit realm. Incense is still used today in the Roman Catholic Church and other religions for purification.

The smoke created by smudging connects our physical plane to the realm of the sacred, and opens a portal to the world of subtle spiritual energies. We are also connecting with thousands of years of prayer and ceremony when we smudge.

Smoke from smudging can also carry up our prayers to the Great Spirit.

The research on smudging

New research reveals that smudging works as an antiseptic.

The article “Medicinal Smokes reduces airborne bacteria,” published in the journal Ethnopharmacology in 2007, reported on a University of Witwatersrand study that found a 94% reduction in the bacterial count of a room that had been treated for one hour by smudging with medicinal herbs.

One hour is a long time to be smudging, and would likely set off smoke detectors, but it’s good to know it brings about some reduction in bacteria.

Once again, our Native elders understand both the spiritual and physical realms better than modern man.

When and why to use smudging

Smudging is often the first step in any ceremony. It helps bring the participants into the present, leaving behind the stress of their lives and other distractions.

There’s no limit to the situations where smudging can be of benefit:

Over your heart, saying “harmony”,

Over your head, saying “humor”,

Down your front saying “humility”,

And then behind you, saying “honesty.”

You’re drawing these qualities into yourself as you do so.

To smudge you will need:

Light the sage and start smudging: pass the abalone shell around to distribute the smoke. If you have a feather, you can use it to send out the smoke in different directions.

When you’re done, you can put out the burning sage by pressing it into the abalone shell or the ground.   When you’re finished, return the ash to the ground.

Where to get sage for smudging

The ideal is to pick your own, always making an offering of tobacco. Never pick all the sage in one area; leave some so it looks as though you were never there. And never pull it out by the roots.

You then hang it to dry, out of the sun. If it dries too fast, with too much heat, you’ll kill off the essential oils which give it it’s good smell.

You can also grow sage or even buy it.

In the old days, when they reached adolescence, Native youth were taken down to the sage fields and introduced to the sage plants ceremonially, asking permission of the spirits of the plants to be able to pick it. That’s how things are done in the traditional way. With great respect.

Things are easier for us now. We can buy sage bundles in metaphysical book stores or on Amazon, hoping they were harvested in a good way.

And that’s the way it is with everything in life today. We may have easier access to obtaining spiritual objects by buying them– in the old days such things were earned — but most important is that we use them in a respectful and prayerful manner.

In a world filled with technology, hurrying up, shallow entertainment and corporate greed, it is up to each individual to find the sacred in every day life, and smudging is a very good place to start.

Why we shouldn’t celebrate Christopher Columbus!
The Secret of the U.S. Constitution
Summer Solstice at Stonehenge: live streamed this year!!
It’s time to go back to the Original Instructions!
Memorial Day: More than the start of summer!
A new book on meditation during these trying times.
Why I’m Hopeful… Our Golden Opportunity
You’ll never walk alone!

8 reasons why I don’t text. And a few reasons why others should
The History of the U.S. Constitution We Weren’t Taught in School
Prophecy of Crazy Horse
What is the 7th Generation principle and why do you need to know about it?
Reincarnation: how to know if you lived before
The Winter Solstice – why it’s the true new year
The U.S. Constitution and the Great Law of Peace
Sacred Fire: the manifestation of Spirit
Tobacco: Do you know how sacred it is?
My heart broke Tuesday night