We come from the stars 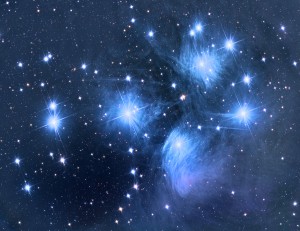 Do you ever look up at the night sky and feel a longing?  A familiarity?  As if perhaps you came from the stars?

Whenever I look at the Pleiades I feel a calling to home.  And there’s a reason for that.

We come from the stars. The carbon, nitrogen and oxygen atoms found in all life on earth, including humans, was produced originally in stars billions of years ago.

That is scientific fact.

Stars that collapsed, exploded and scattered over the universe became part of gas clouds and formed the next generation of solar systems.

“The nitrogen in our DNA, the calcium in our teeth, the iron in our blood, the carbon in our apple pies were made in the interiors of collapsing stars.

“We are a way for the universe to know itself. Some part of our being knows this is where we came from. We long to return. And we can, because the cosmos is also within us. We’re made of star stuff.” Carl Sagan, in the 1980 PBS series “Cosmos.”

“You couldn’t be here if stars hadn’t exploded, because the elements [the carbon, nitrogen, oxygen, all the things that matter for evolution] weren’t created at the beginning of time, they were created in stars. So forget Jesus.  Stars died so you could live.”

As is so often the case, things that scientists are just now proving have been known by the ancients for time immemorial. They didn’t need proof; they had an inner knowing of what was right and true.

Some Native American tribes teach that there is one star in the heavens for each human on earth that is their soul twin.

Most ancient cultures around the world, have legends about the major star clusters.

They teach they are descendents of immigrants from Star Nations, particularly the Pleiades.

Native American legends denote the Pleiades as a sacred place in the heavens. Lakota legend says they originated from the Pleiades and that, after death, the soul returns to its home in the Pleiades.

And while they are on earth, they were given the task by the Pleiades to tend and care for Mother Earth. Native American tribes have done a very good job of that tending. The rest of us have not.

One of the Mayan names for the Pleiades is “The 400 boys” – keep in mind that this was at a time when telescopes able to count the 400 stars of the Pleiades had not yet been invented.  Or had they?

The Chinese Emperor Huang Ti, who scholars credit with the cultural, social and economic development of China around 2537 B.C., attributed his knowledge to visits from beings from the Pleiades.

The Kiowa and Cheyenne have oral histories that seven maidens were placed in the night sky to protect them from a bear. These seven maidens became the Pleiades and that is why some tribes refer to the Pleiades as The Seven Sisters.  While the actual star cluster contains over 400 stars, there are 7 that are most visible to the naked eye.

Cherokee story of the origin of the Pleiades

Here is a Cherokee story of the origin of the Pleiades and the Pine Tree as told by James Mooney in “History, Myths and Sacred Formulas of the Cherokees”

“Long ago, when the world was new, there were seven boys who used to spend all their time down by the townhouse playing the gatayu’sti game, rolling a stone wheel along the ground and sliding a curved stick after it to strike it. Their mothers scolded, but it did no good, so one day they collected some gatayu’sti stones and boiled them in the pot with the corn for dinner. When the boys came home hungry their mothers dipped out the stones and said, ‘Since you like the gatayu’sti better than the cornfield, take the stones now for your dinner.’

“The boys were very angry, and went down to the townhouse, saying, ‘As our mothers treat us this way, let us go where we shall never trouble them any more.’ They began a dance – some say it was the Feather dance – and went round and round the townhouse, praying to the spirits to help them. At last their mothers were afraid something was wrong and went out to look for them. They saw the boys still dancing around the townhouse, and as they watched they noticed that their feet were off the earth, and that with every round they rose higher and higher in the air. They ran to get their children, but it was too late, for they were already above the roof of the townhouse – all but one, whose mother managed to pull him down with the gatayu’sti pole, but he struck the ground with such force that he sank into it and the earth closed over him.

“The other six circled higher and higher until they went up to the sky, where we see them now as the Pleiades, which the Cherokee still call Ani’tsutsa (The Boys). The people grieved long after them, but the mother whose boy had gone into the ground came every morning and every evening to cry over the spot until the earth was damp with her tears. At last a little green shoot sprouted up and grew day by day until it became the tall tree that we call now the pine, and the pine is of the same nature as the stars and holds in itself the same bright light.”

What do these star teachings mean for us?

What does this mean for us?  How can we use this information?

It may help put things in perspective – that we are part of a greater whole.  And our mission in this life is to find our place, our contribution.  To truly be stars on earth.

Just like stars, we may feel we’re exploding and dying, when we’re actually turning into a supernova.  Something more beautiful than we ever imagined.  That’s our destiny.