What is a leader?

[quote]“In gentleness there is great strength. Power most of the time is a very quiet thing.”  Sun Bear[/quote] 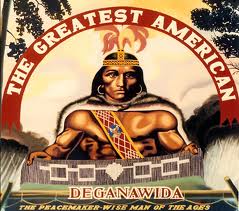 It’s President’s Day, and this is an election year, so my thoughts have gone to considering what makes a good leader.  And I wonder if we really know in this country what a good leader is.  Or, more importantly, do our own leaders know.

Here are some Native American teachings about leadership:

A spiritual leader can communicate with the animal nations and weather for the protection of the people.

In most indigenous societies there are no wealthy classes or poor classes, no homeless.  Everyone had what they needed, was equal and was free.

I’ve written previously about how the first Europeans who came to the New World sent news back to Europe in the 16th-18th centuries that even the “savages” embraced equality!  That news became a catalyst for the demand for democracy in Europe to replace the ruling classes and the abject poverty of the peasants.

Legend of the Peacemaker

The first recorded great Native American leader was “the Peacemaker.”

One thousand years ago, the five tribes in the northeastern U.S. were constantly at war:  the Mohawks, Seneca, Oneida, Onondaga and Cayugas. The wars were vicious and, according to tribal history, included cannibalism.

One day a man arrived in a white stone canoe from across Onondaga Lake to teach Peace and an end to violence, saying “Peace is the desire of the Holder of the Heavens.”

He traveled among the tribes for many years, teaching people to love one another and live together in peace.  One by one, each person and village accepted his teaching.

He gave instructions to form a government based on equality, freedom of speech and religion, dignity and harmony.  This became the Great Law of Peace, and the five tribes collectively became known as the Haudenosaunee, which means People of the Long House.

The United States Constitution is based on the Great Law of Peace.  But that will be the story of another post.

He was known as Deganaweda, but was considered such a great leader, and so sacred, that his name is rarely spoken.  He is known only as The Peacemaker.

Our greatest leaders  [Abraham Lincoln, Martin Luther King, Jr., Nelson Mandela, to name just a few]  were all motivated by bringing peace, equality, freedom and compassion to the people.  No other legacy is worthwhile.

I would recommend keeping these things in mind when voting and choosing our leaders.  Can they meet these criteria?

[quote] “I am poor and naked, but I am the chief of the nation. We do not want riches but we do want to train our children right. Riches would do us no good. We could not take them with us to the other world. We do not want riches. We want peace and love.”  -Chief Red Cloud (Sioux)[/quote]